Big ups to the bros in Yells at Eels and Dave Dove and his trio--including Jason Jackson on sax and Sonia Flores on jazz vocal--for bringing a joyful noise to the Fireside Gallery in Ft. Worth this past Sunday. Really hope shows like this become a regular occurrence in the art space, as it seems to have genuine potential for bringing together "avant-gardistas" throughout the DFWD area triangle for some truly interesting night flights in the coming weeks/months. This was my first time at the space, and the sights and sounds were warm and inviting to say the least. Also hope the above quintet (they played a super-combo-jam after the trio sets) comes together again some day soon. I'll be going back May 15th to see Norman, OK's Anvil Salute and some local yokels.
My Bloody Valentine and Lift to Experience (first gig in 8 years?) tonight at the Palladium Ballroom in Dallas. MBV's North Texas debut, in fact. I promise to bring my special earplugs. 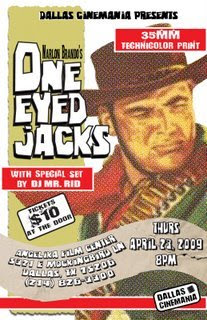 Another cool thing... Dallas Cinemania looks to be on top of their game this Thursday (tomorrow):

Just a reminder about this week's screening, Marlon Brando's directorial debut (and the only film the actor helmed) 1961's ONE-EYED JACKS. We've sourced an IB Tech 35mm print of this baby and we promise it's gonna be special.

When we first started making the short list for films we wanted to show on the big screen, OEJ was at the top. I personally couldn't believe our luck when we landed this one. It's suffered in the public domain due to it's sketchy legal status. Most of the $1.99 DVDs you can find of this are sourced from a decade plus old Paramount laserdisc and they're rather underwhelming to say the least. We've got some indications that a new HD version might be making the rounds soon -- no promises -- but this will probably be the very last time you'll get to see it on the big screen. Come out to the Angelika Film Center and witness history -- Thurs, April 23rd. DJ Mr. Rid kicks things off around 7:30pm. Tickets are $10 at the door.

And a fond farewell to J.G. Ballard, the great science fiction author of such classics as The Drowned World, Crash and Empire of the Sun.
Posted by Lee at 2:42 PM 0 comments

Well I had hoped to post something about my SXSW trip this year, but never really found the time to reflect in depth. Been a busy two weeks. In brief: Endless Boogie lived up to their name (the singer/guitarist sported the coolest hairdo of the fest with a long straight black mop and short cropped goatee) and brought the epic trance boogie. Outrageous Cherry shone brilliantly at the midnight hour with their bubble-fuzz assault. The Dicks jerked hard at the Austin Music Hall. Warmer Milks screamed black fury at the blurry dark night at the Music Gymnasium with a five synth death dirge. The Renderers unleashed their charred noise twang on an unassuming patio of early-evening microbrew sippers at the Spiderhouse (and twice more at various other locales), and The Wovenhand exorcised the demons at The Soho with their hypnotic mix of post punk crash and Pentacostal wrath. A truly massive trio. And always happy to see Naked on the Vague uncork their industrial noise rock grime.

And there was more... the avant drone skree of Zanzibar Snails, the hillbilly stoner folk of Phospherescent, the dark country pop of Handsome Family (like the Renderers, all their songs are either about deep holes or dark caves) and the throbbing psych punk metal blast of Earthless with J. Mascis on second guitar... to name but a few.

All in all, SXSW '09 was one more panorama of shifting sights and sounds, but it was time spent with friends, including The Renderers and their violinist John White (he released a great CD on Last Visible Dog while back entitled Mogwash and performs regularly with Alastair Galbraith) and Jason from Bardo Pond, Tom Lax (he owns/runs Siltbreeze Records), his buddy PJ, and Mikey, Shawn, Mike again, etc that proved most beneficial. Tom Lax is a master chef and a really nice guy. He spun the new Blues Control and Tybek records upcoming on Siltbreeze, and both sounds like real beauts--thanks for the spins! And the stories. There were more great sets too, and a car crash in a Chevy Malibu filled with road-weary New Zealanders and their equipment, but thankfully no one was hurt and I guess I was about done with that car anyway. Later that night walking the streets of SXSW Day Four with John White provided more surrealist gems. At one point we noticed forty feet of sidewalk on 6th street that was covered with a brilliant arrangement of discarded paper plates that created a kind of polka dot flurry of white saucers like something out of a pop-art gallery. And we made it into Emo's just in time to see Daniel Johnston play "True Love Will You Find In The End." It's official, John, you've seen Daniel Johnston live. Also had a ball drinking whiskey and filling up John's ipod with all my weird rawk suggestions. He loves Daniel Higgs. Once again thanks to Nari, Womblife's guardian angel.

What else... I was lucky enough just this past weekend to see L. Cohen play his first (and possibly last) Dallas concert at the Nokia Theater in Grand Prairie, where through a miraculous series of events my companion and I found ourselves trading in nosebleed seats for 2nd row center right and the most perfect vantage point I've ever had at any such live spectacle. We were treated to three hours and six encores that drew from 40 years of recorded music and well beyond, complete with poetry recitations. Cohen is simply one of the most gracious, precise showmen I have ever witnessed on stage or in any other place. His world class 9 piece backing band, those beautiful Webb sisters, and all those hoots and applause--so uncustummary to my typical showgoing experiences--left a taste of the holy in my throat and a sense that anything is possible if we work hard enough and never stop believing in ourselves, and even something greater.

ticket and an article clipped from the Ft. Worth Star Telegram

The very next day I made it over to The Granada to catch Robyn Hitchcock and his new band The Venus 3, featuring Peter Buck on guitar, Scott McCaughey on bass and Bill Reiflin on drums. Hitch was fresh off his appearance in Jonathan Demme's Rachel Getting Married (which is actually really good) and the third release with this lineup, Goodbye Oslo (Yep Roc), and in peak form throughout with his trio of alt rock heavies taking flight in some of the finest post Byrds/Big Star guitar pop I've seen on a stage since Big Star themselves when I caught them on New Years in New Orleans back in Y2K. Who knows where the time goes? 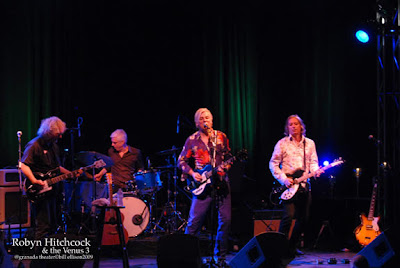