Oh yeah, I totally love the new Soundtrack of Our Lives double album, Communion. Get hip! More reviews are coming very, very, very soon. Till then watch this groovy interview with Bardo Pond by the master of acid himself, Brother JT!
Posted by Lee at 6:47 PM 5 comments 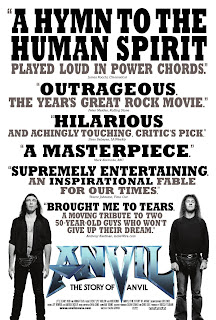 To quote a dear friend, Mr. Wall of Sound is goin' down. Phil Spector gets 19 years to life for the second degree murder of actress Lana Clarkson. No one's really shocked at this point, are they?

I recommend all readers of this here blog see the movie Anvil! The Story of Anvil. The movie makes its Dallas premier tonight, complete with a band Q & A and live performance(!) at The Magnolia. I've already seen it and can say it's just as funny and moving as you've heard. Don't dwell on the Spinal Tap comparisons which are not entirely fair, though they do make for a wise marketing scheme. Maybe it's the likeness between Anvil drummer's name, Robb Reiner, and original Spinal Tap director, Rob Reiner, that has so many reviewers subconsciously dubbing Anvil the real life Spinal Tap, or maybe it's the fact that lead guitarist Steve "Lips" Ludlow likes to play his guitar with a giant dildo. Whatever the reason, Reiner is an amazing drummer, and from the moment Lemmy dubs them "a great band" and "good guys" I'm pretty much hooked. These people are real and their story is genuinely moving. Some bits may have been staged, but that's OK -- ever seen an Errol Morris movie? I was more reminded of The Wrestler during a couple of the slower/sadder passages. And yes, I downloaded Metal on Metal as soon as it was over, but I feel like a bastard for not actually paying for a copy from the band's website. Kudos to director Sacha Gervasi for kicking this one out of the coliseum. Added bonus: He's a Hawkwind fan!

** Addendum: Attended the premier tonight, saw the band play and met them. Rawk!

*** Second Addendum: Can't help but wonder if Anvil isn't one one of the bands Fenriz is hailing in the Darkthrone anthem, "Canadian Metal."


Speaking of movies, seen a few lately and looking forward to seeing a few more. Eagerly anticipating Bruno, Drag Me To Hell, Up, The Road (which doesn't open till Autumn) and more, too (Where the Wild Things Are, anyone?). The Star Trek reboot gets my vote, though I think it might have been just a bit over-praised at this point. I'm a Lost fan, too, so I guess I can understand the mega-enthusiasm that greeted its release. Terminator Salvation at least looks great but is ultimately a disappointment, yet still a beautiful heavy metal action juggernaut of a disappointment that should be seen on a big screen. A reluctant robo-mechanical thumbs up.

Trying to decide what to do tonight: Bob Log at Club Dada, or Anvil at the Magnlolia, or noise show (Lychgate/Venison Whirled/Xasthax/etc) at Wasted Words House in Arlington... We shall see.

And finally, as you've probably heard at this point, St. Louis electronic dronegazer Joe Raglani recently had all his gear stolen. This happened just after he played the No Fun Fest in Brooklyn. We're talking thousands of dollars worth of stuff mostly tweaked/assembled by Raglani himself over the years. Irreplaceable. Kvist, his label (which released the excellent Web of Light LP) has set up a donations page at their site to benefit Raglani and musician Steve Hauschildt, who also had his gear stolen. Tomorrow night there's sldo a benefit concert being put on at White Flags, which Raglani himself will be playing (I assume on borrowed equipment):

"For the first four months of this year, local electronic musician Joe Raglani (Kranky Records, 2008 RFT Experimental Musician of the Year) prepared for his first cross-country tour by selling off multiple pieces of equipment and much of his music library, relentlessly producing and recording new material, and scheduling and booking the tour by himself. With the funds, he bought three vintage synths and two new amplifiers, put together some tour-only CDs and tee-shirts, and rented a van, presuming the tour would pay for itself and give him enough money to get home.

In the early morning of Sunday, May 16th, one night after playing a set at the No Fun Fest in Brooklyn, Joe stepped away from the van to get some food, and a professional thief broke in and stole nearly $10K worth of equipment, much of it custom-tweaked, which took over a decade to assemble. This included the laptop onto which Joe had ripped much of the music he'd sold to buy the synths and amps, which were among the gear stolen. Caught in the act while loading the last piece of equipment into his car, the thief tried to run Joe over. When Joe told the cops that he wasn't able to get a license plate number because of this, they laughed.

This Saturday, May 30th, we will attempt to redress this wrong as best we can, in the only appropriate way: by throwing a big party.

SPINNING EVERYTHING FROM GARAGE ROCK TO MINIMAL SYNTH, NEW WAVE TO NEW JACK SWING, ELECTRO AND DUB TO HAPPY HARDCORE AND IDM.

MAY 30th, 9PM @ WHITE FLAG PROJECTS . $10-$15 STRONGLY SUGGESTED DONATION (IT'S A BENEFIT, Y'ALL).
spookyinfo@gmail.com FOR MORE INFO, OR TO VOLUNTEER SERVICES, ARTWORK, OR SUGGESTIONS."
Posted by Lee at 6:32 PM 3 comments

Happy Mothers day to all the Moms out thur. Courtesy of a fellow Facebooker (think Matador)...
Mother
Uploaded by fibbox - Music videos, artist interviews, concerts and more.
Posted by Lee at 3:33 PM 2 comments