I sure love me some coffee. Keeping it under 3 cups a day these days though. Not getting out as much on the social scene but still trying to be semi-active and by and large a good bit healthier. Drinking less. Not smoking at all (mostly). Longevity is the key my friends. I miss a lot of folks, but I keep in touch through other means and keep soaking up the sights and sounds. As a result, I'm mostly spending all my saved bar money on records and DVDs. The new pile is high and deep! Trying to work through it inch by inch this Summer and catch up with some promos as well. Many, many amazing releases have passed over my threshold in the last few months, some listed below:
...and a whole slew of tapes. Hope to get a good chunk of these reviewed in the coming weeks. Without a doubt, one of the most amazing things I've picked up this year is the Van Kaye + Ignit career spanning 5LP boxset, Anthology 80 - 85, lovingly packaged and remastered by the always excellent Vinyl On Demand label out of Germany. Connoisseurs of Cold Wave, Synth Pop, Experimental New Wave on down the line definitely should check it out. The wax is heavy, the package stunning, and the music quite incredible. Also found myself pleasantly knocked out by the uber-gay '80s synth pop stylings of Ford & Lopatins's Channel Pressure (Software) -- one half of which is Daniel Lopatin of Oneohtrix Point Never. Get a taste here. In the same listening session I discovered the Turkish Psych rock/surf explosion of Hayvanlar Alemi's Guarana Superpower (Sublime Frenquencies), which bears more than a passing resemblance the ethnic acid eruptions that Rangda has been unleashing on the masses in recent times.
Otherwise, I dug Season 1 of Game of Thrones so much, that I'm now reading the first book of George R. R. Martin's A Song of Ice and Fire series. Call me crazy. Really digging Treme this season, and happy to see True Blood back among us. Witches, necromancy, fearful fairies and vampires with political ambitions -- what a tangled web Alan Ball weaves! Loved Takashi Miike's 13 Assassins, Malick's The Tree of Life (filmed partly in and around Dallas) and still need to see Herzog's Cave of Forgotten Dreams, preferably in 3-D. X-Men: First Class gets an endorsement, as does Super 8 (barely), and Bridesmaids was, of course, hilarious. I've not seen much else new stuff beyond that. Hangover 2 was okay I s'pose.
Been mostly watching a bunch of Netflix streaming movies of late. Terrorvision, Irreversible (blegh but pretty good), Masters of Horror: Cigarette Burns, Yojimbo, Black Death, They Live, Sling Blade, John Lennon: Plastic Ono Band and My Son, My Son, What Have Ye Done all provide moderate to high levels of art and entertainment, especially that last one for Herzog/Lynch freaks. That's all for now with more to come. And congrats to the Dallas Mavericks. Guess you guys finally earned it. Dirk FTW.
Posted by Lee at 6:44 PM 0 comments 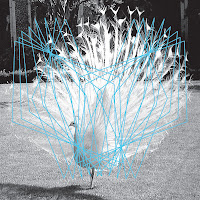 Valerio Tricoli / Thomas Ankersmit Forma II (Pan) CD - From the same label that brought us Keith Fullerton Whitman's Disingenuity b/w Disingenuousness LP comes Forma II, recorded across two years by Ankersmit and Tricoli, here exploring the electro-acoustic/music concréte micro-verse via Serge Modular Analog synth and saxophone, run through a barrage of computer and tape manipulation across six tracks ranging from 6 to 15 minutes. The results are deeply textured sound dreams that merge the organic and mechanic into a blur of abstracted tones that sound as "natural" as the para-mechanical world we live in, where subatomic events are an every day, perceivable occurrence. Here they're blown up under the microscope, dissected and exploded apart before being reassembled into gorgeous minimal/drone/noise hybrids ideal for high-fidelity submersion thanks to Rashad Becker's excellent mastering job. This sounds incredible on the proper system. Pan's proprietor Bill Kouligas (Family Battle Snack, Sudden Infant) and Kathryn Politis provide the brain-tickling cover art. Not a second (or sound) wasted. 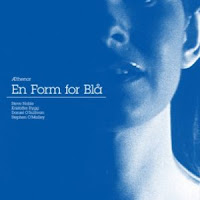 Æthenor En Form For Blå (VHF) 2LP - The latest dispatch from Stephen O'Malley's abstract drone/doom/improv ensemble is another moody trawl through the dark waters of atmospheric spontaneous live performance. Percussion, guitars, bass, Fender Rhodes and who knows what else are employed with two members of Ulver -- Daniel O'Sullivan and Kristoffer Rygg -- and Steve Noble rounding out the quartet. These seven tracks were culled from three live shows captured in Norway in 2010, though you'd be hard pressed to discern such given the sound quality and music concréte like detail of much of what's captured here. The results offer up at times nightmarish, bass heavy delirium, and at other time almost skeletal prog metal infusions -- see the ghost doom mid section of "One Number of Destiny in 99" -- which almost immediately drift back into the foggy depths from whence they came. En Form For Blå may not be as strikingly formidable as its predecessor, Faking Gold and Murder, but what it lacks in immediacy it more than makes up for with progressive scope and surreal mood. A worthy addition to this ensemble's legendary discography. Pressed on lily-white vinyl to make it all go down that much easier.
Posted by Lee at 10:36 PM 1 comments