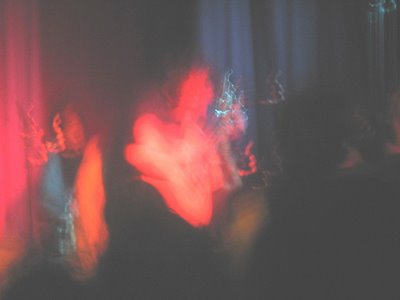 Little Jimmy has gotten back to where he once belonged. Terrastock was a blast. Saw so many faces, familiar and new, had a Guinness with Jack Rose in a thumping techno club/Irish bar early in the AM (and Larkin Grimm and Miriam from BF/BS too!) After seeing the incredible sets by all three, I feel that much more humbled. Got to catch up with Mats and Anna from Sweden, Mike Tamburo, Joe and Jeff and the Green Pajamas family, finally put a name to the face with Kevin Moist (a beardstocker from way back, though this was his first official appearance at the fest), got to have many fine exchanges with the consummately cool masters of ceremonies, Jeffrey Alexander and Phil M., say hi to MV, EE and Zuma (their set was beeeeyoootiful, as are the two new Bummer Road releases I snagged at the merch table), had my own impressionistic brush with death and the infinite (roughly during the time Avarus and BOTOS were ripping the fabric of space time wide open), and talked to the lovely Arttu from Avarus about American pro wrestling and other mysteries of the cosmos, like why the only records he purchased from the incredible merch room were Kenny Rogers and other bad country acts.

I had a few complaints here and there. Ghost's set was masterfully performed, but somehow felt too rehearsed. A similar complaint has met their recent studio work (which I've gobbled down enthusiastically), and now I sort of get it. As one observer casually observed, it felt like they were playing a different festival, yet Ghost undeniably are a key band and central figure in the development of the Terrascopic sound. And Michio is Michio. No coincidence they had the best soundmix of the weekend. Otherwise, all grins. Amazing scheduling. Larkin Grimm was a revelation with her dulcimer, guitar and vibrant chirps and vocal dances. The Spires that in the Sunset Rise were mangled and twisted and completely absorbing. Marissa Nadler had fun and brought a tear to my eye with her soaring rendition of "Box of Cedar" (it's a coffin!). Lightning Bolt crushed and spazzed on our level, brought the mosh to the hyper spastic subset of the Terrascopic nation. Dangerous people indeed. Bardo Pond induced massive waves of billowing distortion in the big room. Major Stars were fucking RIDICULOUS and boner-inducing in their new sextet format (the new album seems somehow pointless in light of their writhing porn-sex live energy). MV/EE and the Bummer road stole the fucking show. Charalambides rocked harder than I'd seen in years. Kinski fucking slammed. Landing pulsed. Sharron Kraus floated on the trembling night air. I missed some sets do to some sort of viral infestation, but at least I saw Avarus, baby! (Avarooooz)....fucking amazing. I now fully, finally GET IT. Their new album and live set are/were stupefying. Arttu told me "we will bring a joyous noise," and somehow all that maddening squiggly gremlin bad acid boogie was joyous in a Holy Mountain kinda way. Beautiful, inspiring....very real.
Favorite sets in no particular order:

Fucking amazing weekend. Thank you to Travis and Narnia for being there to share it all. And Mike T for showing me the way. Thanks to Matt Valentine for saying I'm a good writer and actually meaning it. Thanks to Jeffrey and Phil for being good pals and making it possible. Thanks to every kind face and warm regard. Feels like it will be with me always. And finally thanks to Zuma (and the Rolling Stones and the Beatles and John Fahey and Townes Van Zandt and the other conspicuously absent trailblazers). Peace and love, friends. One ginormous invisible love.

Most of the sets from KFJC's streaming broadcast of the weekend can be downloaded here, courtesy of Red Nail. Thanks, Bunk!

Some random candids taken by Phil McMullen during the gig can be found here.

More of my own photos from the weekend can be found here, and yes there are some missing sets.

I bought a fat pile of swag which will likely get mentioned here and elsewhere in the coming weeks, but first I have some reviews to catch up on. Expect another update asap.
Posted by Lee at 8:29 PM 0 comments

well, i was gonna wait until monday to "officially" release these two new gems, but i'm too damn excited about them. both releases are the first CD (non-CDR) releases from each group and is, in my wholly biased opinion, the best thing each have done. nothing but love:

Deep inside an abandoned bunker on New Zealand's north island, With Throats as Fine as Needles have perfected their craft. On this, their debut CD release, the group has expanded to a quartet. Birchville Cat Motel's Campell Kneale and Pseudoarcana chief, Antony Milton, have joined forces with James Kirk (Sandoz Lab Technicians, Gate) and Richard Francis (Eso Steel) to create a claustrophobic, organic web of massive drones.

Everything on this CD was recorded outdoors with battery-powered instruments. Underneath the ground, the quartet burrows out their own cavern, bouncing sounds off the walls until it becomes a singular, solid mass. Each gently sculpted tone floats in humid air. The music is saturated with the dirt and grime from a million a years of human history, wailing out in unison like an excavation turned exorcism. With Throats as Fine as Needles are your guides through this aural fog.

As far as the Southern Hemisphere goes, Australia's budding underground has often played second fiddle to that of it's island neighbor, New Zealand. But a new crop of Aussies is levelling the playing field. Leading the way is the brother/sister duo of Michael and Kristina Donnelly AKA Brothers of the Occult Sisterhood. These cosmic travelers are soaked to the bone in dust, like relics from the past. They speak only in tongues and send out shortwave psychedelic radio transmissions into the bleeding edges of drugged-out folk sludge.

BOTOS' organic compositions are familiar to many by now. After a string of CD-R releases on Time-Lag, Celebrate Psi-Phenomenon, and others, this is their first pro-pressed offering. Building on transcendent themes and saturating everything in an all-encompassing puff of bong smoke. Endless walls of instrumentation create artificial bounderies that the Donnellys destroy with far-reaching, hypnotic drones. By the time"Goodbye" comes to a grinding halt, it feels like the stuff of legend. Brothers of the Occult Sisterhood are only interested in blowing your skull to smithereens while cradling you in their arms. They are simply magnificent, and there aren't many doing it better these days.

so that's the new dice... two totally sweet jams that will tickle your every fancy. whoo! http://www.digitalisindustries.com/catalog.html

and the CD reissue of tom carter's "glyph" should be ready to go soon, too. the first 500 come in gatefold digipacks, silkscreened on one side by rob fisk, and spraypainted on the other by tom. they're gonna be totally sweet.