Yello, Womblifers. I've scored a leak of The Flaming Lips' Embryonic and I'm loving it. I know, I know, advance MP3s are destroying music. I'll buy a copy...promise. It's definitely their best since Yoshimi, and if you like your Lips extra rare (read as raw) it just might be better with its battery of double drums blasted into the stratosphere via a pronounced prog (read as Miles fusion era) feel that helps to throw things off balance in a reallly good way. Probably one of the more fucked up things that will drop on a so-called major label this year, or at least since the last Portishead record. I expect mixed reviews in general, but don't let that scare you.


Also received a sweet package from my old friends at Digitalis, including the new Bugskull LP, Communications, and Social Junk CD, Born Into It, along with a whole mess of tapes. Man I love me some cassettes, tell you what! Reminds me, here is a list of 101 current and operating tape labels that might deserve your attention if you've got a functioning tape deck and have grown tired of paying exorbitant prices for CDs and vinyl (and digital downloads) while trying to keep up. I still buy all that shit, but tapes are cheaper and they sound great with this kind of music. As I prepare to start a self-imposed exile from buying any new CDs or LPs for the next year, I can assure you I'll still be buying tapes.

Many of the tape labels operating today specialize in some variation of noise, and by noise I don't just mean the harsher stuff, though much of it is pretty harsh. Free jazz, minimal drone, Dada collage, acid boogie psych, grinding industrial pulse and maximal noise mantra (made up that last one just now) are just a few of the possible sonic styles that might be heard on a cool underground noise tape released circa now. Good noise music often times tells a story, whether via a more accessible trad rock performance or just one lone warrior and an arrangement of pedals set upon a cardboard table, hence the term "table-core." Good noise music can also erase thought entirely, even if only for a brief period, like any form of meditation.

Anyway, I don't read Pitchfork often, but here is a pretty good article covering noise music over the last 10 years, though it does skew a bit too much on the American underground at the expense of other vital scenes. Maybe they can put together a sequel covering Europe and so on in the near future. Doubt it. There are opinions that some may not agree with (myself included), but it's still a decent overview for those hoping to play a little catch-up.


Another recent development here in the Womb is my immersion into all things rap and hip-hop. I finally downloaded a Linkin Park album(!), which was recorded with Jay-Z, but I don't know if I'll get around to actually listening to it. Not a big fan of those dorks, but I sure like me some Jay-Z, without shame. It's an intimidating wave-pool to delve into, but don't let that stop ya. The recent discovery of the astonishing Blunted in the Bomb Shelter by Madlib (arguably the finest reggae/dub mixtape out there) led me to this in depth article about rap mixtapes which manages to cover a lot of ground and even go into the history of the phenom. Probably the only time MTV will ever be linked to this blog. Let's hope!


What else, been rediscovering my old heroes The Flamin' Groovies in recent weeks, 'specially during their heavy Stones-centric period. I still think Teenage Head is one of the most criminally overlooked proto punk art blues rawk records to come out of the West Coast. Even Mick Jagger is purported to have said The 'Groovies did a better job than The Stones did on Sticky Fingers. The title track is timeless garage boogie with menacing street-punk snarl. The cover of Randy Newman's "Have You Seen My Baby?" comes off like Chuck Berry on biker speed. Opener "High Flyin' Babe" has a bit of Beefheart's early garage blues down 'n' dirty groove, but it goes down so easy here. Right after this landmark dropped founding member/lead singer Roy Loney would leave the group, on the surface a tragedy, but actually not a bad thing at all as it kicked off a fruitful solo career for Loney, and the rest of the Groovies went on to record the all-time classic Shake Some Action with the great Dave Edmunds at the console. But that's a different story.

Re The Rolling Stones: I think Mick Taylor's playing is a huge part of what really makes their music the timeless country blues it is. Sure we all love the earlier stuff, and we love Brian Jones, but Taylor stepped into the spotlight along with the biggest band in the world at a moment's notice, and he managed to make that bottleneck slide sing like only a true blues man can. One only need watch footage of The 'Stones live in Hyde Park in 1969, a gig which was a spontaneous tribute to Jones, who'd died only three days before, to see what I'm getting at: And now check out this article, courtesy of The Daily Mail, to see what Taylor's been up to since those glory days. Ain't pretty, but it's an interesting read which might possibly lead to righting some long time wrongs for the under-appreciated genius.


Speaking of singular guitar wranglers, doubt you'll find a more unique/influential string bender than Keith Rowe. The AMM co-founder has managed to remain one of the most visionary experimental/improvised guitarists in the world, and he's still playing over 40 years after the formation of his legendary trio. His more recent stuff can possibly come off as overly studied or academic to the unfamiliar ear, but anyone even remotely interested in abstract drone, noise, ambient sound, free jazz, minimalism the limitless crossover possibilities between them all, should take a gander at this in depth interview with the man from All About Jazz and get their brain-bananas suitably tickled by by this fantastic clip:


I'm also super-happy to see a new Clean album hitting the stores. Mister Pop (Merge) is a beauty that should be heard by all lovers of hummable guitar art pop bliss. One of my fave musical historians, Jud Cost, interviewed the Kiwi-pop legends for Magnet recently. Dig it.


I'm not sure if I've ever mentioned Jersey City's WFMU Freeform Radio here, steered magnificently via the musical direction of Brian Turner. Their Beware of the Blog offers a virtual cornucopia of all kinds'a oddball musical tidbits and obscure live and OOP downloads that you can get lost in for days on end. Most recently been grabbing some sonic souvenirs via their ATP-NY 2009 live broadcasts, including Akron/Family, Melvins and Grouper, among others. And -- get this -- WMFU is smack dab in the middle of its own kickass WFMUfest as I type. Lucky bastards.

Social Junk / Mincemeat or Ten Speed / Dick Neff / Corporate Park at House of Tinnitus. There was one more solo guy on the bill, but not sure of the name, and that in no way reflects badly on the quality of his set, though it actually didn't do much for me personally. Local duo Corporate Park (Perhaps a name change is in order, guys -- American Airlines Arena?) combined Throbbing Gristle/early Psychic TV electro-skree with death-disco beats that had everyone in the house doing the robot chicken dance. Special props to my mate Kelly for spontaneously breaking into a goofy Ian Curtis like broken limb dance which made me smile. Dick Neff (the drummer for SJ) combined knob twiddling distortion with one man and a drum-set bombast in a way that had me thinking of Lightning Bolt and related noise metal spastics in a good way. Mincemeat or Teen Speed brought the one man and a bunch'a pedals primitive weird noise symphony to an ecstatic hula-hooping climax which left me pleasantly splattered but still in one piece. As reward for a job well done, I bought the beautiful limited vinyl LP, All Critters, whose mind-bending surrealist artwork is worth the bucks alone.

The came the mighty Social Junk, whose brand new Born Into It CD is showing me the tribal-light as I type. This is a record that manages to touch on everything from glitched out electronic sound sculpture to the kind of post/art punk mantras that This Heat so brilliantly traded in for a brief period betweel the late 70s and early 80s. Throbbing Gristle is here too, and more recent weird rock abstractionists, a lot of them coming out of Brooklyn, maybe one or two out of Detroit, but these Philly kids manage to burrow out a sound that's entirely their own through these muddy subterranean tunnels. It's a dark mantra for the ages, as much studied post-punk coming into industrial anything-is-possible experimentation as it is something more intangible and not really of this earth. You get the idea, right?

The primitive, repetitive noise reveries of Born Into It didn't really prepare me for the blistering intensity of the live set, which hones the quality and studied intensity of the above record into something much more devastating and immediate. I f0und myself up close and very personal, three feet from the noise/effects guy on the right and maybe six feet the drummer on the left. We, all of us there, headbanged in unison, a crashing symphony of flesh and bone, propelled by something beyond human -- a crushing noise/doom assault the duo (usually trio) conjured from thin air. As much spontaneous incantation as pulverizing hardcore assault, and we were all the better for it. Very rarely in a live setting have I seen something, so often dismissively dubbed harsh noise, yield such artful results. Cell phone pix of said event: 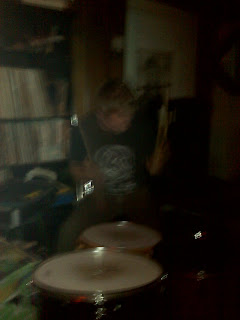 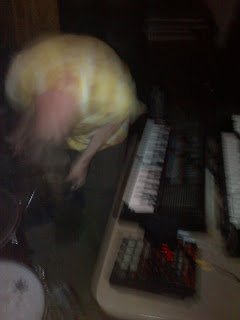 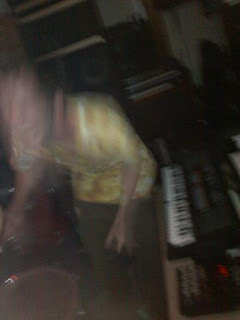 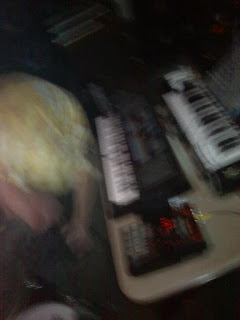 And then just this past weekend we made it out to the Improve Lottery at The Phoenix Project, a new performance space on the edge of Exposition Park (just outside of the Fair Park area) which promises to deliver its fair share of quality avant-garde punk and weirdo aural entertainments in the coming months/years, God willing. The Improve Lotto was some joker's brilliant idea (don't ask me who), and it was a truly fine endeavor that turned into a recalcitrant blur soon enough, which rocked and howled one moment, groaned and clanked like an old coughing gas generator the next. It the sets witnessed, the one with three horn players, two electronics tinkerers and one free jazz percussive master left the best taste in my mouth. I'd attempt to say more if only I hadn't been so overstimulated by it all. So I'll just leave you with this: DFW matters once more. One only need pay attention.
Posted by Lee at 2:14 AM 9 comments