People in and around Brooklyn really should to go to this: 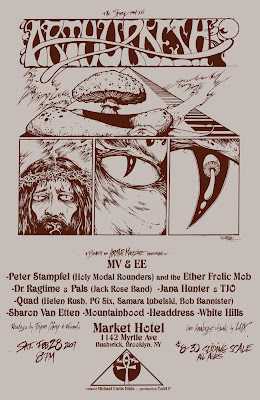 Two Documentaries Designed to Bring You Closer to God...

Man on Wire, dir: James Marsh (Discovery Films) - I saw this Oscar winner in the theater, and I can safely say it really is one of my most exhilarating viewing experiences in 2008. Even though we know the outcome going in -- Philippe Petit traversed that mighty gulf between the two WTCs back in the late 70s and lived to tell the story -- every second of this movie feels as if it was happening right now in real time. Recollected commentaries, amazing archival footage and modern day recreations are all edited together seamlessly to describe a great caper in which the culprit wanted nothing more than to kiss the sky. True magic indeed.

Encounters at the End of the World, dir: Werner Herzog (THINKFilm) - Herr Herzog has done it again with this haunted little rumination on Antarctica and its various inhabitants -- above and below the ice -- so seemingly out of step with the rest of the world. What kind of person ends up at the bottom of the world? What kind of penguin traipses off to its certain death? And just what the hell is a neutrino? See this and perhaps find out. Beautiful music, stunning photography and Herzog's own touched narration help make Encounters a keeper for the ages and a must see for anyone who's ever fallen prey to spiritual/physical wanderlust.
Posted by Lee at 11:19 PM 0 comments

Holy shit! Have you people heard of Shrinebuilder? No songs posted yet, but it sounds like they're almost finished with the debut album which will come out on Neurot. Greenings and Salivations! 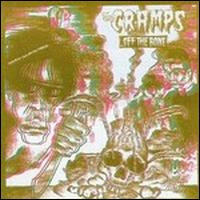 And: RIP Lux Interior. Sorry to say I never got to see The Cramps live. Their ...Off the Bone LP, a collection of their earliest demos produced by Alex Chilton, is a serious contender for the best pure rock album of all time. For real. Wicked, thumping rawkabilly that defines much more than a generation or an attitude or a scene. This is modern primitivism. I must admit I hate most of their followers, but that's a different story.
Posted by Lee at 2:08 AM 0 comments

Now this is all right. Folks with even a passing interest in related activity in and around The Tower Recordings camp (the same fertile soil from which the MV & EE Medicine Show and PG Six originally sprung) will want to make note of this recent announcement from the excellent improvised/drone/folk ensemble, Pothole Skinny. Looks like just about everything they've released and other more recent archival things are available for download via their digital store -- as high quality mp3s in format of your choice -- and the price is up to you the buyer. So be fair, people! Happy downloading!
Posted by Lee at 12:37 AM 2 comments

Li'l late here: Just wanted to express my deep gratitude to MV & EE for playing a beaut of a country blues live set for a very small, rapt audience last Monday at The Lounge on Elm. It was in all honesty the most gorgeous, loud-ass performance I've seen from these kiddos yet. A few hardcore psych blues heads made it out for the festivities, including Captain Groovy (he owns every single MV/EE related CD, LP, CD-R, tape, etc, or so he claims) and his pal Dean, SubKommander Mike and bass guru Aaron G. for what was roughly an hour of blissful psychedelic genre smashing.

This was the sixth gig I'd seen by this mystical duo (including two with The Golden Road at the last Terrastock), and the sparse turnout had me a bit worried but also feelin' kinda moon-kissed and in the now (then). Anytime you can hang out somewhere with MV & EE and not sweat anything more than having enough cash fer the merch and enough whiskey fer the glass, you're doin' all right. The set drew heavily from the new album, Drone Trailer (Di Christina), including a soaring fly-high version of "The Hungry Stones" which married Neil Young and Dino Jr. in a driving hybrid of shuffling acoustic guitars and shimmery lapsteel drone. Also completely mind-blowing -- "Huma Cosm" -- MV's epic free/slow blues number that came off like a cross between Loren Conners and a very drunk Neil Young trapped in 1974. Centerpiece "Solar Mountain" (surely THEE MV/EE EPIC DRONE JAM of recent lunar cycles) was a thing of great beauty and calm that eventually ranneth over with PSF-worthy guitar squalls that had me wondering, what if Keiji Haino sat in with The Dead just once in late 69? The banjo raga climax threw everything into serious stomping frenzy and left us all howling for more, literally. Yeah it was pretty heavy for just two people. It was in fact a sight to behold. Bought 2 tapes, 2 CDs, a little book of poetry called "Plumbers Crack." Hugs were free.
Posted by Lee at 11:37 PM 4 comments 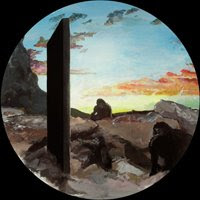 So I think it's pretty well known among the informed and hip-to-me that 2001 is almost my favorite movie, which is just one reason I had to order this beautiful split picture disk from The Music Fellowship:

The Monolith series combines two artists on the same one-sided, reverse-cut LP by hard-panning one recording to the right and the other recording to the left. By adjusting the panning controls on his or her turntable, the listener is free to control the degree to which the two recordings melt into one. Each edition in the series is limited to a one-time pressing of 500 picture disc LPs featuring a Monolith inspired painting by Ned Clayton and includes a CD with stereo mixes, extended versions, and bonus tracks.

Monolith: Earth is the oxymoronic pairing of dreamcore drone legends Windy and Carl and new school leaders of free rock Heavy Winged. Heavy Winged contribute one of their darkest, most oppressive tracks yet. The addition of Windy and Carl's purity creates something entirely different. It's no longer the sound of three bros busting out dark drone metal in some shed in snowy Vermont; it's now the sound of some communal artists busting out epic krautjams in the German hinterland. Primitive, vicious early man meets colossal pristine symbol of higher thought - could there be any better pairing for this Monolith?