Foxy Digitalis's weekly update features a fine review of the latest live One Ensemble of Daniel Padden CD-R, scribed by your Womb-master, and sitdowns with everybody's favorite Uncle Jim (Actually Al Bishop of the Sun City Girls/Alvarius B/Sublime Frequencies) and Elizabeth Harris, aka Grouper, plus much more.

Also, Deep Water's e-zine guise is now up and running with profiles on Nick Castro, Uton, and the dearly missed psych cult rockers, Thin White Rope (the name's a Burroughs term for ejaculate, you prudes). Also, I babbled here about limited, mostly CD-R releases, and Tony Dale shares his recipe for Damper Bread. We hope to be updating this on a staggered monthly basis, so turn on, tune in and freak out! And check out The MIGHTY Clear Spots while you're there!
Posted by Lee at 12:52 PM 0 comments

A little bit out of left field here, but then in two years I’ve never mentioned Dischord once in Womblife. This is, after all, the label that gave us Fugazi, Rites of Spring, Shudder to Think, Scream and a lot of other crap! At least in regard to one long-standing band on their roster, I finally get it. I’ve heard Lungfish a few times over the years, and I never really knew what to think. “Hardcore noise rock”? “Proto-emo”? “Post-shoegaze”? A li’l later I realized what they are isn’t nearly as important as how they sound. And they sound pretty fuckin' great. “Feral Hymns” is their 11th album of angular crash and burn stomp rock with song titles -- “Time is a Weapon Against Time,” “You Are the War,” “Invert the State” -- that make their vaguely political intent known, while the lyrics and delivery maintain the expected art-school distance. What sells me is the trance-inducing repetition of their driving three-piece workouts, conjuring early 70s King Crimson and “Man Who Sold the World” era Bowie equally in heavy lumbering jams without all the prog bloat. Every song sounds fairly similar, but again, it’s about realizing that this is a good thing. For a glam-prog head such as myself, their power is hard to deny. “Feral Hymns” is the coolest real rock record for real rock rebels I’ve heard in at least two weeks. 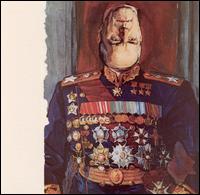 On a completely unrelated note, if you have about 30 mins or so to kill, you can watch this filmed tour of Steven Stapleton's (Mr. Nurse With Wound) home and family. Pretty cool shtuff, nabbed from Brainwashed.
Posted by Lee at 3:31 PM 0 comments