Oh Hey! Busy time of year, idn't it? As a result of new pressures and responsibilities -- some fairly disturbing, others outright inspiring -- on top of the old ones, Womblife will soon be bringing on at least one more (semi)regular contributor to both help lighten the load on yours and offer a more broad coverage of all those special sights and sounds that help make life a little bit more bearable. That's all I will say for now, though this guy has already been a contributor of sorts with recommendations and past comments leading to many blogs posted here over the years.

As mentioned at the bottom of this recent post, I was privy to some mighty fine electronics/noise/jazz improvising at the recent Improve Lottery jam held at the Phoenix Project. I was also so enamored in the moment at the time that I don't really remember any of the proper lineups or much more beyond a kind of propulsive miasmic goo that felt like one of H.P. Lovecraft's parallel dimensions had crashed into our own with all sorts of squiggly beasties and glowing shark-plankton swimming through the air. It was pretty neat. [All that stuff I just typed was paraphrased from Stuart Gordon's brilliant From Beyond, which you all must rent right now if you've never seen it.] Anyhoo, looky over here for detailed lineups of the Improv Lottery and another link where you can even download each and every set, as recorded by Zanzibar Snails member Michael Chamy. He also manipulated feedback/electronics that night in the fourth ensemble. I've already stated somewhere that the fourth set was my favorite, with a kind of John Coltrane Ascension blasted into outer space vibe about it. Featured players in all sets are members of DFW local area bands such as The Tidbits, Zanzibar Snails, Subkommander, Yells at Eels, Akkolyte and more.

For yours truly, this past week has been the live show whirlwind here in Big D, and all the more so given who all actually played. First up was a rare opportunity ('least in these parts) to see Marissa Nadler at the Modern Art Museum of Ft. Worth, a locale that was a far cry from the small pub/bar she played four or five years ago in Dallas, back when she was, in her own words, "still a child." Could be said Nadler has done a lot of growing in the last few years, developing a powerful, brisk fingerpicking guitar tone and honing that operatic voice of hers to a resounding ghostly lilt. Then there's her supporting musicians, multi-instrumentalist Jonas Haskins (from Earth -- the band) and guitarist Carter Tanton of Tulsa (which is also a band), two guys who perfectly accent, augment, open up and support our forlorn chanteuse through her perilous journeys. 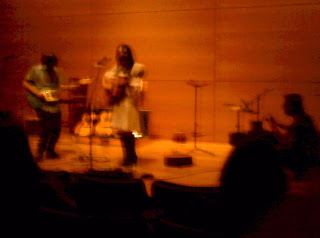 Though I (sadly) arrive too late to catch Denton group Bosque Brown's opening set, Nadler more than makes up with a compelling show drawn from her first, third and fourth albums, which is perfect as this offers my first chance to see some songs from Songs III: Bird on the Water and its followup, Little Hells, (both Kemado) in a live setting. Though she may have still been "just a child" when she recorded that first album, even then Nadler had forged her own unique poetic expression of the classic existentialist lost soul -- what we all fear becoming. It's all there in the lines of the remarkable opener to her first album, Ballads of Living and Dying (Eclipse). The song, "Fifty Five Falls," is as much a warning as anything else -- the tale of Mayflower May and her fifty five falls of lonliness and isolation. Such a dire yet completely lived in little song. It's one that can haunt the listener and the player on an equal plane, but so refined and accessible is its melody that we've no choice but submit to its dark spell. It was very cool that she closed her set last Wednesday with this amazing little gem since it's the very first song I ever heard by her. Also loved her Neil Young cover (which was actually written by someone else) whose title escapes me, and her ethereal rendition of Leonard Cohen's "Famous Blue Raincoat" (check out her video for it here!). It's always a gift to spend a little quality time Marissa Nadler. And the songstress she's touring with, Alela Diane, is a dream in her own right, offering a slightly more earthy folk chanteuse sound. She's a beauty, and I was happy to nab a copy of this limited 10" recorded with Alina Hardin. Includes ace covers of "Maddy Groves" and one of my all time favorites, TVZ's "Rake." All in all a truly magical night. 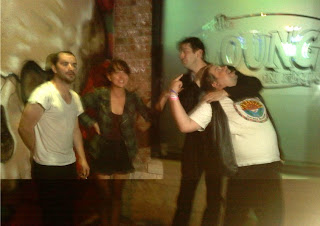 Then two days later I made it out to The Lounge on Elm, which is becoming one of the better local venues for good punk/garage/psych underground happenings, all three genres The Axemen embody every aspect of without even trying. They're just naturally weird. I was shocked to find that they and Times New Viking had piggybacked onto Health's bill at The Lounge. Auckland's Axemen are living legends and a first wave Flying Nun band to boot. Lead guitarist Bob also has an amazing indie pop type band named Shaft that you probably ought to hear sometime if you like your 3Ds and Clean records. The Axemen are an altogether more skewed and scuzzier garage art punk slop concoction closer in line with earlier Pere Ubu, Public Image Limited and New Zealand's own Scorched Earth Policy, though you could say that The Axemen have an even more absurdist wit than all of the above. Just wrap your ears around the Siltbreeze reissued Scary: Part III 2Lp to try and figure it all out. It's ugly. It's beautiful. It just might make you piss your pants. Live these old goats kick out a raucous punk snarl that had me thinking Stooges one second, Beefheart and Wire simultaneously the next. Absolutely pummeling stuff that sounds right at home in the state of The 13th Floor Elevators and Red Crayola. Times New Viking tore it up as well with what amounts to probably the best gig I've seen by them to date.

Then the next night it's back over to The Phoenix Project for a regular prog extravaganza featuring the likes of local drone fusion act Small Talk, Denton's Orange Coax, Philly's Many Arms and some goofy German duo called Schnaak and Ft. Worth's own Great Tyrant. Small Talk squawked and blurted with clarinet over moog and a weird creeping backdrop of cutout translucent images and swirling oils. Orange Coax did the hurky-jerk no-wave freakout like X-Ray Spex in a mash-up with Teenage Jesus and the Jerks and ave the best drummer I've ever seen in a live setting (possibly a slight exaggeration). Many Arms were like King Crimson worship on steroids or Mahavishnu meets Sonic Youth. Cool enough, but them cats just don't know when to quit! Schnaak offered a bit more solace to the bombast with some trippy almost ambient interludes mixed into their prog throb. The Great Tyrant brought the iron-hulled synth dirge crush like Nick Cave fronting a cross between early Swans and prime Hawkwind. But I was beat, so left before they finished.

And then just this past Monday made it out, spur of the moment like, for the Blues Control gig at Mable Peabody's and was not sorry I made the trip. Also pleasantly surprised to see lots of the young and familiar local weird noise yokels out and about on a Mondaynight digging the crusty Brooklyn ghetto-tech highway boogie that Blues Control conjures, and they brought it this night with urbanized noise mantras that bridged the gap between early 70s prog and boogie rock and good old fashioned homemade noise sych. Very sweet indeed. There were more bands, which probably rocked real good, but I didn't hang much after saying hey to Lea and Russ (Russ wearing the same Warmer Milks shirt I got from Mikey Turner the first time I met him a few years ago - ha!) . 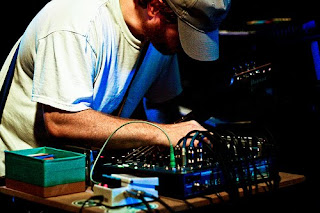 I need to upload some more images and vids of recent gigs and events to the Youtube channel/Photobucket eventually, but the big ol' pile of reviews in the corner is howling like a dying dog, so it could be a while. Have you heard the new Birch Book album? Holy shit! It's going to be a long bleak Winter, my friends.

In the meantime, here's a pretty good quality video of a sweet Zanzibar Snails gig I recorded at The Phoenix Project back in September. Though the visuals are pretty murky most of the time, the sound quality is top notch-ish. Enjoy! Part 2 and Part 3 for further perusing.

And one more clip my old buddy Greg E. captured of The Jesus Lizard last week at the Fun Fun Fun Fest in Austin, which I could not attend. Not bad for a rinky-dink video phone thingy, but it's a shame he cuts out right at the start of "Gladiator"! Here's the same song caught in higher quality.
Posted by Lee at 11:35 PM