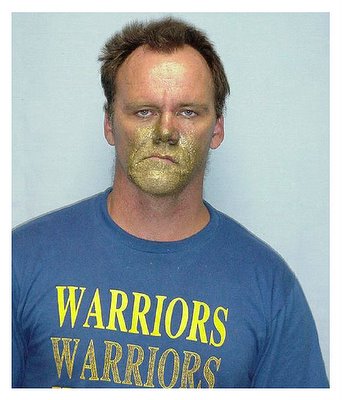 Email ThisBlogThis!Share to TwitterShare to FacebookShare to Pinterest
I'm having one of those "I feel dead inside" days. It is nothing new, but sharing this sensation with the blogopshere is. Send me candy, drugs and/or special limited CD-R promos.
Posted by Lee at 3:41 PM 0 comments

So Miers is gone and I loathe to see who her replacement will be. Looks like Dubya will have at least enough time to get his second justice appointed before the impeachment proceedings begin.

In different news, clipped from a Myspace message board:

The new Throbbing Gristle album is completed, delivered, ready to got into production and is titled: PART TWO. Official worldwide release is January 2006 on Mute Records. The initial pressing will be an extra-special edition. Live dates to be announced very soon!!!..please check www.throbbing-gristle.com and www.myspace.com/throbbinggristle for latest updates..new info soon ..its VERY EXCITING!!!!! 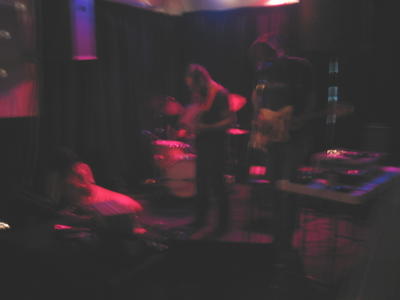 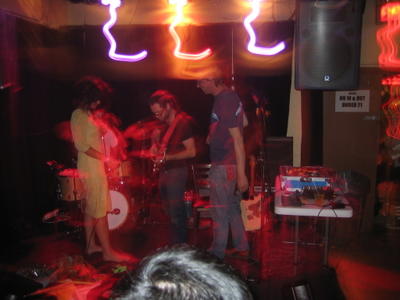 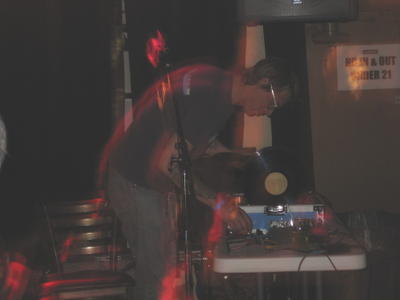 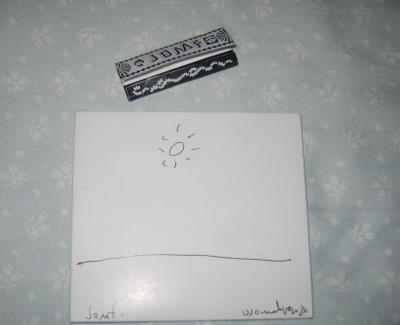 Vol 20 of the U-Sound Archive series, featuring a nifty impromptu cover drawing of the state of Texas by Tom Greenwood. Apparently the members of Jackie-O first came together to make fine smoking products, and only later did a proclivity towards more musical activities reveal itself. Well rounded and psychedelic: Made in America.
Posted by Lee at 2:12 AM 0 comments

I did make it out to see Devendra Banhart and his Hairy Fairy Band the other night, though the best part of the evening was the drive out there when we rocked some Townes and the new Lightning Bolt and smoked superdank till we turned green. The new LB in particular is something to be reckoned with: a CHARGING primordial SHRED METAL post hardCOREkrautROCK assault!! They should use it to reanimate expired corpses. 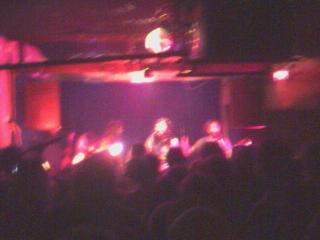 At the Devendra show I observed:
The club was too small. It was overcrowded and sold out (last time I saw Banhart in Dallas, 30 people were there, and most didn't even pay attention as he played crosslegged on a table top).
A cute blonde with big byoobs brushed against me as she danced.
She couldn't help it.
We talked some.
A fight broke out and some poor fella was cracked over the head with a beer bottle. Blood everywhere! As a result the cramped club immediately became looser and easier to move around in. I jumped in front of big byoobed blonde as large protectors tend to, tried my best to see where all those loud "thuds" were coming from. At the time it occurred to me that this was a Devendra Banhart show, supposed hippie dippie love dream blah blah, dismissed the whole torrid affair as sign o' the times.
Devendra and his frazzle haired gaggle of craggles were not so bad, playing through the melee. Big byoobed blonde disappeared to the front of the crowd, was never seen or heard again.
Shouted: "What happened to Woody Guthrie, Devendra?" in a cockney accent.

My Pops came through his operation just fine.

SHEESH...I really need to get some new friends or somethin'. Wolf Eyes played here Saturday night, and NO ONE bothered to inform me just in case I wasn't up on the concert calender thingamijig, and I wasn't. I LOVE Wolf Eyes...you should too unless yr a pussy. They're playing Austin in just under a month, so all may not be lost. Sure wish they'd bring Comets on Fire with 'em.

Seeing Devendra Banhart and his Hairy Fairy Band tomorrow with the one and only Bunnybrains should serve as some sort of compensation. I quite like the new one, Cripple Crow. Not as good as the first three, but the good songs are really darn good.

Got the "Invisible Pyramid: Elegy Box" today. This is definitely doing the trick. Doesnt hurt that so far every contribution (listening to Up-Tight on disc 3 currently) has rivaled the best material from each artist I've been exposed to before now. Well, almost... Also got the new Tetuzi Akiyama on Locust, been LOVING "Buck Dharma" by WWVV, The Eyes and Arms of Smoke LP on Cenotaph, this three way split Cd-R by Hush Arbors/Terracid/The North Sea on Barl Fire; August Born is beautiful stuff... The latest live Current 93 album is a sad dream. More on all this later, mayhaps. It's a shame I'm not going to be able to see C93 in SF in a few weeks. Real life is like that sometimes... fuckin' lame.

Don't ever let anyone tell you that the world is a cruel and unjust place:

Old bird face-slapped with a tofu pie in France!

As some of you may or may not know Brian Wilson has come up with a rather bizarre/cool plan that only he could dream up: He'll match anyone who makes a donation of a hundred bucks or more to the Red Cross and--the kicker--make a personal phone call to that person so he/she can ask Mr. Wilson any question of thier choice. Pretty rad, and apparently he's already raised over $200,000 and been making lots of calls. Tempting...

Kelley Stoltz, a recent Sub Pop signing that I quite like (early Bolan crossed with late 60s Kinks based on the couple songs I heard, with nice throwback production to the days of my infancy), made a donation. Here's the story, hijacked from the Sub Pop site:

"So Kelley’s girlfriend paid for him to do that Katrina benefit deal where you donate $100 to the Red Cross & he matches your $ & gives you a phone call & let’s you ask him a question. So the very same day they pay for it Kelley is sitting around the house spacing out & he gets the call. “Hi Kelley, this is Brian Wilson…”. He was apparently pleasant & asked what Kelley did etc. Kelley hadn’t worked up a question yet for him but in a rush he remembered that after getting his piano tuned he could no longer play a song he plunked around on called “Meant for You” so he asked him what the chords were. Brian’s response was “I wouldn’t know”. So that conversation kind of ground to a halt & Brian said “thanks for donating etc.”. Kelley was pacing around going wow, that was weird, what a trip etc. & the phone rings again. “Hi, Kelley it’s Brian Wilson. The first chord is an A-minor”. So Kelley goes over to the piano & smacks an A-minor & starts playing the song & sings a little bit of it & Brian joins in & they sing a 4-5 verse duet!!!!!! What the fuck????"
Posted by Lee at 2:59 AM 0 comments

The leaves are growing old and deathly again as we all come together for the seasons of mischief. This was originally to be Part 2 of my Summer's End Pop Roundup, but now it's simply:

Part One of The Fall:

Old friend Øyvind Holm (Ringleader of Norway's masters of psych pop delirium, Dipsomaniacs) returns with his solo debut, "The Vanishing Point" (Camera Obscura), a heartfelt collection of rustling folk pop and psych rock that draws from the likes of the Byrds, Love, Dylan, John Lennon and maybe Guided By Voices for influence, but of course the biggest inspiration on Øyvind's songs is his life, and it's one lived with emotional clarity. These ten tracks easily rank among his best, but then he's probably one of the most consistant tunesmiths on the planet after all is said and done. "Self-Mutated Summer Breeze" goes from a jangly uptempo rush to fuzz implosion before the rousing chorus takes us to the fade. Elsewhere he employs harmonica, ivory tickles and tasty string swells to give everything a nice warm push into the coming cold season. For fans of Cardinal (excellent s/t'ed album recently reissued), the more structured side of Elephant 6, Beulah, later REM, etc... I'd also like to give a quick nod to Dungen and the reissue of their lovely breakthrough, "Ta Det Lugnt" album here in the states on Subliminal Sounds/Koch. It comes with a bonus EP of material (not as good as on the album, so not really essential if you already scored the import version) in a lovely digipack. What I said before still applies: "Some might dismiss "Ta Det Lugnt" as too retro or, the horror, too Swedish; fair I suppose given Gustav Ejstes sings everything in his native language in a nasally Lennon-esque tone, but I hesitate to see these traits as shortcomings. In a way similar to maybe Gorkys Zygotic Mynci, Dungen relishes all the retro trappings with glee and, by extension, so does his audience. The pummeling Jack Bruce meets Keith Moon drum work, the ornate strings, astounding guitar work and reverb drenched vocals are all lovingly employed in a dish crammed full of inventive ideas....easier to get into than a Volvo."

Every one of Mercury Rev’s six albums to date brings something interesting to the table, though the last one definitely showed them floundering a bit. "The Secret Migration" (V2) is a step back in the right direction me thinks with booming, shimmery pop constructions conjured with an ear towards classic 60s symphonic psych and all our favorite musical auteurs. The results are upbeat with a deep production, if not a tad overly familiar. This could be the best thing they've released since "Deserter's Song" and not necessarily just another rehash of what's come before; either way, it’s definitely a Mercury Rev record, with an almost mythical quality cascading throughout. I still like what they have to say, but it largely seems the rest of the world has moved on, or regressed, depending on your perspective.

This Delaney girl is new to me, but I like her moxy on this self titled debut, released by the Pehr Label. A Frenchie playing jangly pop songs that fall somewhere between Cat Power and PJ Harvey, all sung in the native language, mind you, which I suppose would make this French pop! Sensual and catchy, sad and a little pissy, she manages to transcend her predictable origins, and occasionally rocks out in the process. Better than expected, though not that original. What is today?

Not Of Montreal, but they're still fun to shake yo booty to. "The Sunlandic Twins" (Polyvinyl) is a funky, freaky, poppy dance fix that combines their previous Beach Boys worship with an ever growing slide into 80s post disco. Still timid and loveable, less maniacle than earlier albums. One of the songs is titled "Knight Rider" (a likely nod to George Romero's cult classic). Almost there...

"Oceans Apart" (Yep Roc) comes to us via everyone's favorite Aussie guitar pop export, The Go-Betweens, and it’s another solid effort from these legendary Monkees obsessives. The Go-Betweens are definitely one of those bands that bridged the gap between DIY punk and modern day meloncholic/ melodic indie rock (The Clean and REM are two others), and these 10 songs perfectly convey just why that is; particularly the rousing acoustic jangle pop of "Finding You" and the gorgeous swoon of "Boundary Rider," both radiating a lingering sense of loss as they knock you out with their harmonic splendors. The whole collection is a gorgeous slice of seemingly effortless mid-tempo guitar pop the likes of which too few bands can muster these days, but that hardly stops them from trying, does it? Pay attension, folks. Master Forster and McLennan wrote the book. This version comes with a bonus disk of live material recorded in London in 2004 with a solid selection that spans their storied 27 year career. There you have it: Melodicsm incarnate.
Posted by Lee at 3:12 AM 0 comments