STANISLAW LEM
...the great Polish writer died this week. I have all of his English-translation books I could find save for one. You have to read him, and read everything. His work falls into three main categories: 1) books about man's inability to understand the truly Alien (Solaris, Eden, Fiasco, Return from the Stars, His Master's Voice, The Invincible, and similar in spirit to his two metaphysical mysteries The Investigation and the Chain of Chance), 2) Sci-Fi Humor (Star Diaries, Memoirs Found in a Bathtub, the Futurological Congress, the Cyberiad, Mortal Engines, Tales of Pirx the Pilot, More Tales of Pirx the Pilot (the one I didn't read)), 3) Meta-Book Humor (introductions or reviews of non-existing books; Imaginary Magnitude, One Human Minute, A Perfect Vacuum). The novel Hospital of the Transfiguration is also worthy of your time. His work is overflowing with ideas and the friction of competing scientific theories. Except for the Pirx books, I recommend all of them. The downtown Austin Public Library has many of these books. There are about 11 books that have not been translated into English, so please learn Polish and translate these for me. It is the least you can do. Please!
Sample of Humor
Sample of Alien

(Clipped from Josh Ronsen's excellent AUSTINNITUS, a round up of Texas experimental/jazz/psych happenings)
Posted by Lee at 11:19 PM 0 comments

So long, Nikki. Feels like the end of an era. From the Swell Maps to the Jacobites right up to his recent solo albums (including the one above) reviewed here, Nikki Sudden was one of the coolest, most human post punk Gods. He will be missed.

Here is a haunting recollection written by Nikki about his brother, Epic Soundtracks (whom he formed the Swell Maps with and also died tragically almost ten years ago). Eerie and poetic in that way that only Nikki can be.
Posted by Lee at 6:52 PM 0 comments

I actually sort of wanted to hit up SXSW this year, 'specially to get drunk with Neil Young and check out Marissa Nadler's Texas debut, playing along with Jack Rose and some other people, but thought better of it with another big musical adventure looming the following month and only so much patience for the whirlwind culture media explosion that is SXSW. Besides, drinking that much Red Bull in a week can't be good.

I think I did my bit by crawling out of my dusty din and driving to The Cavern Saturday night(in the rain, mind you) to catch some SXSW carry-over: Marissa Nadler (playing Dallas ?) on a bill with Asobi Seksu ("playful sex"--LOL) and Tunng (beards and beats from England--LOL). Arrived too late to see opening band Voot Cha Index, boo-fucking-hoo.

Asobi Seksu has a sexy, short Asian singer/keyboardist. They sound like Tubeway Army meets Broadcast. They are not original, but they are tight and polished and use strobelights. I also thought Stereolab crossed with early "Seamonsters" era Wedding Present, but I was probably being generous.

Marissa's set was next, and despite a few sound issues ("the soundman is an asshole"), she pulled it off glowingly. Her voice is this massive, reverb drenched siren call from the land of broken hearts--an undeniably rich, luminescent specter that gathers over the crowd and thrives on the concentrated warmth. I was pleased with the response and Marissa and Jesse's (Sparhawk, a talented multi-instrumentalist touring with her this time out) tenacity in fighting through the gaffs and delivering the goods. They looked and sounded great. She played both "Box of Cedar" (set closer) and "Annabelle Lee," two of my favorites. She was shy and it showed (didn't say a word to the audience), yet I think her demeanor suited her songs. 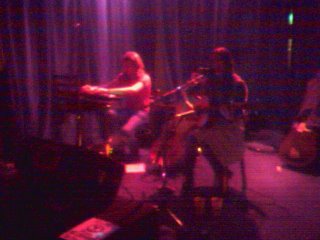 A crappy phone pic taken by your Womb-master.

One fellow said he'd just seen Belle and Sebastion a few days before, and that was really good but didn't even come close to what Marissa did. He bought an album, even though he already owned both of her official releases. Another guy named Mike, who loves free jazz and harsh noise, also bought both albums and promised to do some sort of smash-up remix of Marissa's voice with loops and feedback a la Diamanda Galas. She was actually into the idea.

Marissa is a very sweet, beautiful young woman. I worried all day yesterday as she and Jesse drove up the torso of the American plains through constant rain and snowfall to get to Iowa City. Hopefully, they are sleeping right now somewhere safe in preparation for their show tonight. St. Louis tomorrow (3/21).

After the show, she asked me if she was everything I expected, if I was surprised at all by the real Marissa versus the one I'd gotten to know on record and through email. I hope I didn't disappoint when I said she was exactly what I expected, and qualified that with "I tend to know people really well." And it's true; I do. Her voice though, it was something else.

We both sung harmonies, drunkenly, to Townes' "Tecumseh Valley" much later than night and sounded GREAT together! Well, I thought so anyway...
Posted by Lee at 3:06 PM 0 comments

Back among the land of the blogging, at least for today. Really enjoyed Be Here to Love Me, which comes out on DVD today. A deep, heartfelt look at the man and myth that was Townes Van Zandt; it features some priceless footage of TVZ and his second wife stumbling around his Houston trailer park circa '75, whiskey bottle in hand. Overall, an honest look at what a really down to earth, self-effacing and equally self-destructive guy he was. There are the expected morality issues of what happens when one leaves it all behind to chase inspiration down an endless highway, but director Margaret Brown passes no judgments either way. She obviously idolizes Van Zandt, but this is pretty far from a gush piece. Despite a few blurred collages and old acid-trip stories, "Be Here to Love Me" is a sobering portrait of a sweet guy who probably knew and understood his demons more closely than most of us would ever want to. He came from wealthy means, but he breathed humility. Sincerity appears to pour from his veins every second he's being interviewed, be it for Dutch television or Texas radio.

William Van Zandt's description of finding his father upright on his death bed leaves a chill of finality in the air. People lament the early loss of great talents to dope and excess, rightfully so. They write sad songs about all the good times that were and never will be, but Townes Van Zandt, at least in song, seemed to live a hundred lifetimes or more in just about half the time it takes most of us to figure out how not to fuck up over and over with cyclical precision. The wisdom is in his songs. Can't help but wonder if checking out early was just his way of saying, "Thank you, ma'am, but I got more than my share already."


Also, LOVED "The Sopranos" season opener. I'm sorry to those of you out there who don't have HBO. Been there, done that. DVD's or torrents will possibly help to assuage some pain in the coming months. The voice of William Burroughs is featured in the brilliant opening montage--wickedly cool. Otherwise, don't really want to give away any spoilers [Uncle June's gone bonkers!] or reveal any key plot developments [AJ's grown a mullet!] because I can't stand assholes that spill the beans too early [Carm's getting mighty com-for-ta-ble with her position as wife of The Boss!].

Already hooked on "Big Love," too. Polygamy! Bill Paxton! Harry Dean Stanton! Who knew??? It's like a bizarre anthropogical inverse to "Deadwood" with zero profanity (everyone talks in this castrated "dangit!" and "oh my heck!" speak that's utterly charming and adorable), much God and more sexual tension than The Chicken Ranch during Texas/OU weekend. Thumbs up, brosephs and sistines.

...shit. I have tons of new albums to review, which'll mostly appear in other places. Just got the new Maryrose Crook with The Renderers album on Three Beads of Sweat, "Ghosts of Our Vegas Lives" (released concurrently with Brian's new solo joint under the name Anti-Clockwise, "Artificial Light"--aint heard yet). You Renderers groupies will definitely get a kick out of this Maryrose album, more to come on that front.

Buy your copy of Not Alone on Durto/Jnana if you haven't already. Compilation of the decade, no lie. Also got a fantastic package from United Fairy Moons that I've been soaking up with much disoriented glee, my favorite new label! Rory Storm owns my soul. That's all for now. Check back in a week or two of so inclined.

Hope to see some of you at Terrastock 6 in a little over a month!
Posted by Lee at 11:10 PM 0 comments

I've been reading any articles I can find about TVZ and his later life, preparation for the movie I suppose, and stumbled upon this heartfelt and revealing interview with his son from Rockzilla, which goes into a good amount of detail. Give it a gander.

Also, here are some fairly harrowing live reviews from the early-mid '90s.
Posted by Lee at 2:20 PM 0 comments

Howdy, folkies. Been really busy lately. Hard to believe, I know. Just sweated out a fever, and I'm trying to wrestle a few different articles for a few different publications at once. Crunch time, as they say. The shit I do for rock 'n' roll...

I really liked Capote. Give Phil Seymour Hoffman the Oscar already! Also got some nice chuckles and much visual splendor from The Corpse Bride. Highly recommended if you like that sort of thing.

I have received my copy of Not Alone and will proclaim here, without irony, it is the experimental music compilation of the decade for many reasons, mainly its content. Click the link for the low-down.

That's all for now. Don't expect to really make any updates in the next few weeks or so, but that may change.

Hope to see some of you at Terrastock 6 in April!
Posted by Lee at 6:06 PM 0 comments