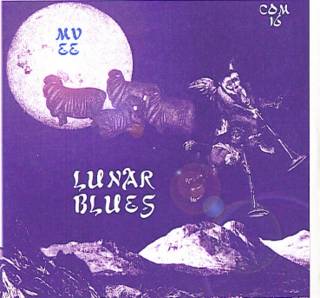 In retrospect the Tower Recordings are one of the truly influential bands in my development as a fan of abstract acoustic/electric folk/noise whatever the hell. From the beginning I was never quite sure where to place these people, and only with time have I come to relish such confusion. Since then various complimentary solo and splinter ensembles with mysterious abbreviated designations such as PG Six and MV & EE have popped up to tide over those of us waiting for the followup to the 'Recordings' Folk Scene, as rumours of their demise are largely unfounded. It's already in the can, and the word is it's heavy.

My lucky bottom found its way down to the humid outskirts of downtown San Antonio a few days ago where the MV and EE (that's Matt Valentine and Erika Elder for the uninitiated) traveling medicine show was stopping through before heading up to Oklahoma City and on to its final destination, the Million Tongues festival in Chicago. I'd seen my fair share of avant-clatter fests where a few different scraggly haired sorts made their way from one home-made or ethnic noise generator to the next, but it'd been many moons since I'd seen such a culinary approach explored from the duo perspective. Things began with a variety of chants, shakers, metallic bowls, and flutes building to MV's introduction of what looked like a stick bass banjo, which was bowed, strummed and strangled across the expanse of the half hour piece. This instrument turned out to be something of a secret weapon among their vintage arsenal, but then so were the spoken word bits, EE's autoharp strums and ukelele pickings. Constantly during this extended improv a more trad acoustic approach was augmented with minimal electronics that proved fascinating and capable of holding attention in their own right. But when coupled with MV's rabid bows and strums, a different kind of beauty was unleashed. This was followed by two folk blues numbers, taken from their recent and brilliant Lunar Blues Cd-R, with EE singing ever so fragile and soft over MV's Faheyesque picking. Things concluded with a massive raga, with a stunning 12 string acoustic workout from MV that reminded me that Glenn Jones and Jack Rose don't have a monopoly on this sort of thing. This is the best show I've seen all summer, if not all year. I even recorded it. Get in touch if you want my Soulseek username. Sounds pretty good, if I do say so mahself.

There was also a short film, The Temptation of Zoology, directed by MV, EE and Gabriel Walsh. It's a fun montage of moody surrealist night shots, creeping through old houses, forest roaming and silent movie absurdity revolving around one creature's strange journey to the other side. Alan Licht, Dredd Foole, and PG Six are among the "guest stars". I kept laughing at various points, but no one else did. At least MV was tickled when I suggested they'd all given Jodorowsky a run for his money.

Also must mention the Children of Microtones label, which I've only barely explored at this point, but the aforementioned Lunar Blues comes highly recommended for fans of mind-freeing space blues and Erika Elder's voice. The Heroine label, a subsidiary to C.o.M., also proves interesting with single releases of extended live jazz interps of songs from the Lunar Blues CD-R, and what I heard so far sounds like da bombus diggitus. Also picked up the super phat (and fat) 2Lp reissue of The Futuristic Folk of the Tower Recordings, just released by Time-Lag, which serves as yet another stunning production in that storied young labels career, and a fine tongue-wetter till Idea's vinyl version of MV & EE's Blues and Ragas is ready for mass consumption in a few weeks.